Boston-based group The Arkadian is ready to raise the bar for the entire (albeit niche) genre of video game rock with their debut single “Rainbow Road.” The track, which will appear on the EP coming out in early April, is an intricate masterpiece that combines creative lyrics with tightly delivered hard rock- and metal-inspired instrumentation for a delightfully unique – if slightly nerdy – listening experience. I’m no gamer but I sure am a sucker for a solid tune, and I can only imagine the glee this song would bring to someone who is a die-hard video game fan like The Arkadian’s creator Jon O’Neal.

Starting off with a simple but energetic drum intro, the song quickly gains energy as more instrumentals and vocals kick in, catapulting the track into the sonic territory of Motley Crue, Van Halen, and the likes. It’s hair metal meets hard rock meets alternative – meets video game rock, upon closer inspection. The song is four minutes of headbang-worthy piercing-yet-clear, strong, sneering vocals paired with hard, aggressive instrumentation and screaming guitar licks, all the while spitting catchy video game references. A killer guitar solo midway through the song adds complexity to the track, highlighting frontman Jon O’Neal’s musical ability – he plays every instrument on the studio recording – and reminding us that The Arkadian are no beginners.

O’Neal cites video game metal and synth pop groups such as Powerglove and Starbomb, respectively, as major sources for conceptual and lyrical inspiration with The Arkadian. This is absolutely tangible throughout the track, which pays homage to the classic Nintendo game “Mario Kart.” With references to the game in the title itself and throughout the song, the lyrics are neither overtly obvious nor aggressively nerdy. Rather, there is a perfect balance of game references cleverly disguised as rhythmic, flowing lines to those who are not as educated on Mario Kart lingo.

The Arkadian can thank O’Neal’s love for hard rock and heavy metal bands such as KISS and Judas Priest for its unique twist on what is already a rather unique genre. Unlike Powerglove and Starbomb, The Arkadian incorporates virtuosic instrumentation as a prominent feature in the track, rather than relying on game-related titles, lyrics, and content to attract listeners despite more simplistic musical approach. This is an admirable feature in a yet-to-debut project; not only does Rainbow Road easily meet the standards set by existing video game rock music, it surpasses them. It is clear with this track that The Arkadian is musician first and game lover second, giving them the ability to reach far wider audiences than anything else of its kind. 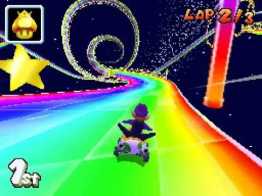 The Arkadian’s upcoming single Rainbow Road is a tasteful approach to video game rock; a beautifully crafted cocktail of fiery vocals, tight, snarky instrumentation, and Mario Kart metaphors with an impressive lyrical flow. The track is creative, entertaining, and downright jam-worthy, even without an investment in the lyrical content. It is not easy to create a Mario Kart-themed song that bangs, but The Arkadian has done just that.

Stay tuned for the Arkadian’s full EP, set to be released on April 5, 2018. According to O’Neal, “the EP will contain songs written about games such as Zelda and Castlevania as well as a song written about the video game crash of 1983.” The group has several gigs lined up around that time including an appearance at Boston’s PAX East, where they’re sure to deliver a stellar show.  In the meantime, check out The Arkadian’s Bandcamp page and follow them on Facebook, Instagram and Twitter!